Right before the entrance of City Park and completely at the end of the famous Andrássy Avenue lies Heroes’ Square. It’s the biggest and most eye-catching square in Budapest. And it’s completely different from all the other squares in town. It has several features, but the most prominent one is the Milennium Monument.

Just like the Fisherman’s bastion and the Hungarian Parliament building, Heroes’ Square was build in in honour of the thousandth birthday of Hungary. This celebration was in the year 1896, but it took untill 1900 to completely finish the square. But thereafter it took around 30 years for it to receive its current name: Heroes’ Square. And in 2002 it got included in the Unesco World Heritage List.

The Millenium monument owes its name to the same event why the whole square was build: that 1000 years before was the start of the Hungarian state. The construction of this monument took much longer than the building of Heroes’ Square itself. On top of the 45 meters high monument stands the archangel Gabriel who holds the Crown of Saint Stephen and the apostolic double cross. Both symbols for Budapest. According to a legend King Stephen dreamed of Gabriel offering him the crown in one of his dreams. The base of the column is surrounden by 7 statues of warriors. There represent the 7 tribes who established the Principality of Hungary in 1896. On top of the colonades on each site of the column, there are 14 statues of kings and other important historical figures.

Apart from the Milennium monumet you see two impressive buildings when you look around on Heroes’ Square. These house the Museum of Fine arts and the Hall of Art (the Kunsthalle). Both important musea. While the first one shows international art from all periods, the second is a contemporary art museum.

Heroes’ Square during the evening

This square at the end of the Andrássy Avenue is very popular among tourists. It’s in every guide and it’s also the place to enter (or leave) the beautiful city park: Városliget. So during day it can be pretty crowded. And if you like to take some quiet pictures… good luck. But the goods news is that as soon as it gets dark you will find almost nobody here. Bring you tripod and your camera and for sure you will make some great shots. And if you are not so much into photography its still very nice to be on this nicely illuminated square. Early in the morning is also a great time to be here.

How to get there

Plan the trip yourself with this Budapest travelplanner

Heroes’ Square on the map 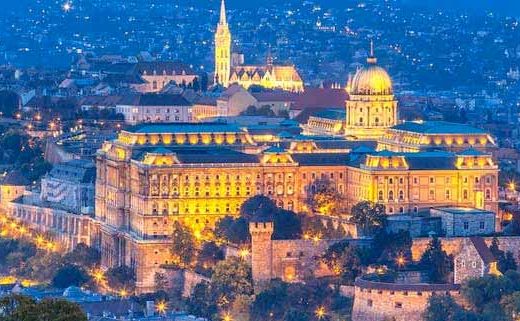